About twenty years ago, while in Krasnodar, GenShi{Gennadii Shirokov} bought a number of nail puzzles at a newspaper shop. They were pretty well entangled and each package contained a description – a story about them.

Once upon a time, back in the XVIII century, English merchants visited the pomors, people who lived near the sea in North Russia. At those times, Russian carpenters built wooden architectural structures with the only help of a saw and an axe and without using any nails at all. So the British merchants brought with them some ordinary steel nails as a gift. While the English merchants were being mesmerized by the unique Russian carpenters’ skills, an unknown apprentice bent and joined 2 steel nails together to test their solidity, and then asked the merchants to separate them. 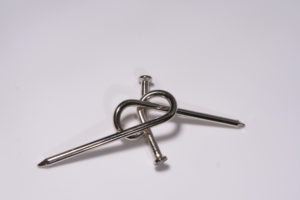 The guests stayedwith pomors for more than a week,

but no one of them managed to solve that puzzle.
When they returned to England, they took the puzzling Russian souvenir along. Many years later, England Baron von Kempe/en, during his voyage across England, bought this expensive family relic on the auction, which was called by the merchant’s ancestors” The Russian nails”.
Baron von Kempe/en { 18th -19 th centuries), known in Russia as Professor MsPuzzle, was an actual member of the Petersburg Science Society. While traveling around the world, he studied the art of magicians, priests and wizards and was honored by many European monarchs.

But what is happening now and how is this story connected with our present time of 2021?

Since 2017 we have been organizing a brainteaser puzzle exhibit The Art of Wisdom at Russian House #1 , and the last one took place in June, 2021. As a part of our tradition, the Russian Nails were featured and took a special spotlight at our exhibit.

2021 is a special year. Times of uncertainty.
However, the exhibit took place!
And the first person to show an interest in it turned out to be French puzzlist and inventor Champelen.
Isn’t it the Miracle?

That served as likely the last jolt that GenShi and I needed to take a flight to USA, overcoming the barriers of the pandemic.
Thus, the Frenchman turned out in fact to be Edouard Chambellan.
And here he shows his delightful brainteaser, the Bell, made even the most experienced puzzle solvers perplexed.

Rarely does anyone know that the motto of California is “Eureka”, which literally means “I have found it!” Eureka is an insight, a brain flash or Aha moment – a sudden breakthrough in understand­ing associated with the discovery of an unexpected causal relationship that was not obvious before. To provoke Aha moments, GenShi creates and makes many puzzles, situations and conversations.

During the exhibit, our Master GenShi puzzled the guests with the brainteasers he just made:
1 . Cone-drive: an impossible figure manifesting the possibility of the impossibility.

GenShi made a spectacle of masterfully demonstrating the creative ways how anyone can use their wits.

If you want to support our Master GenShi and take part in weekly on-line Intellectual clubs please sign up here: https://www.patreon.com/shirokov
Another website http://www.genshi.ru welcomes you to ask Our Sage any question and probably get an answer.

On October 9-10 the team of the Russian House and friends are
holding the exhibition ART OF WISDOM in San Francisco.
Register
https://www.eventbrite.com/e/liminal-minds-an-interactive-exhibit-celebrating-human-perception-tickets-178240892307 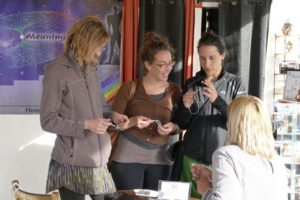 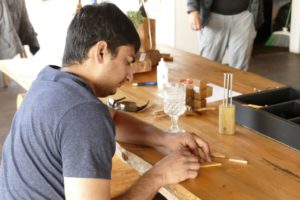 Currently we are looking for a new place for our Russian House!