RUSSIAN HOUSE # 1 operates at the basis of enthusiasm. The enthusiasm of those who are involved in the project entirely, those who’s main purpose is to live and to develop themselves here. 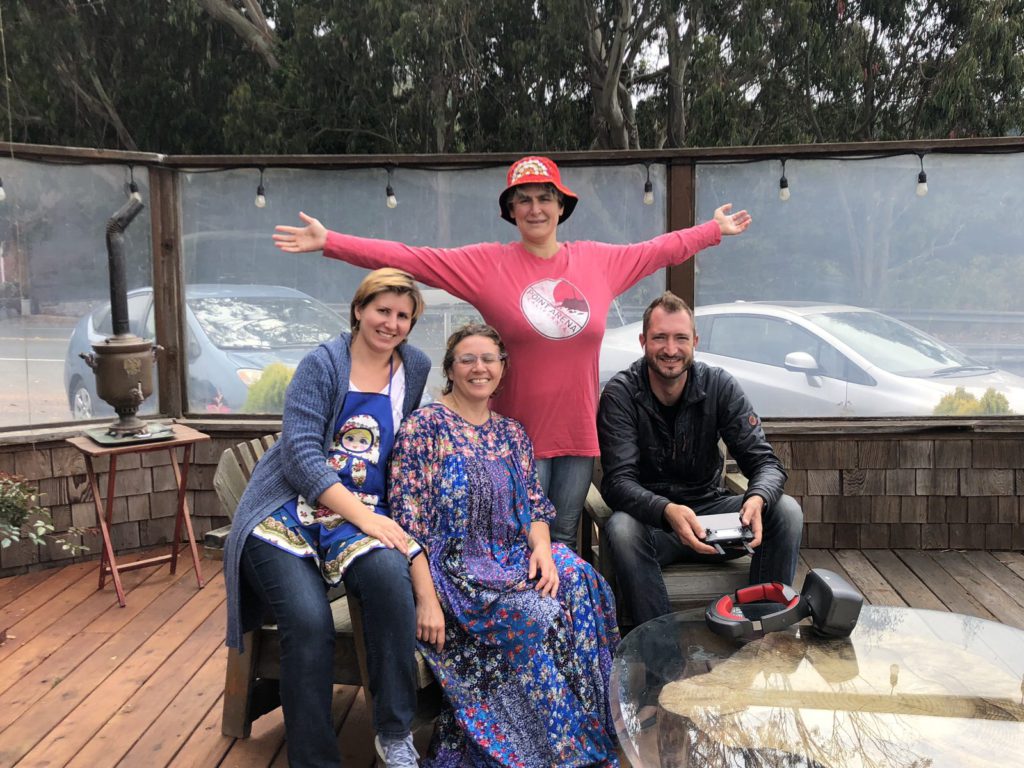 The same time we would hardly have survived and achieved the same success if it were not for our volunteers. Sometimes even two plates washed in time can be a crucial help for us. But some volunteers not only did not limit themselves to simple small things, but actively introduced themselves and their individuality into the process of common creating of the New, here with us.

Here are those who voluntarily and constantly put their time, care, support in Russian house #1 for a long time: 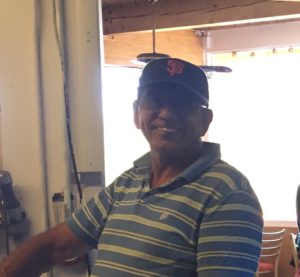 Jeff Stevens is our dear friend. Once, two years ago he just came to us in respond for our craigslist ad and all this time he has consistently come to the Russian House to help. Jeff senses what shall be done, what shall be taken care of and just does it. He made our place flourishing with different plants. He helps us to cook, to clean and to make a numerous amount of all the other things. But the most amazing is that in a those two years we haven’t had a single one, even if the smallest conflict with Jeff. He is always open to suggestions and responds positively to feedback.
Thanks, Jeff. We love you and appreciate! 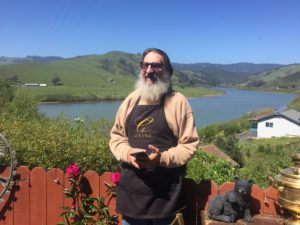 We are very lucky that such a sympathetic and careering person as Bruce lives next to us. We can always ask him for help.
Bruce helps us almost every day to watch the restaurant and talk to guests, to do dishes and many other things. Sometimes he knows what to take care of better than us. We wish
all our neighbors would be like this.
Thank you, Bruce!

Those who come from Russia to help us:
Svetlana Vybornova 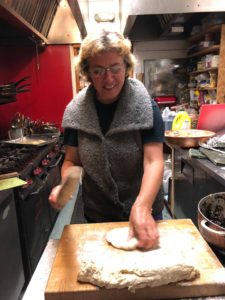 A few years ago, Sveta left her career as a pediatrician, and moved to the Shiram ecological settlement in the Tver region to devote herself to personal growth. Sveta manages the rabbit farm, supports and develops the Shiram agricultural farm, but that’s not all! She is actively learning in Game Mastery School and defended her thesis on reflection. Almost the entire summer of 2018 Svetlana spent in the Russian House.
Despite the imperfect knowledge of English, Svetlana was looking for creative ways of communicating with people, baking cakes, helping at festivals and easily taking on almost all the functions in Russian House. It was her readiness to take on any business, to master it and be responsible for the result that favorably distinguish her from many others.

More than 30 volunteers helped us during this summer and autumn:

In August, we clearly realized that we are located near Silicon Valley. We got Paul. 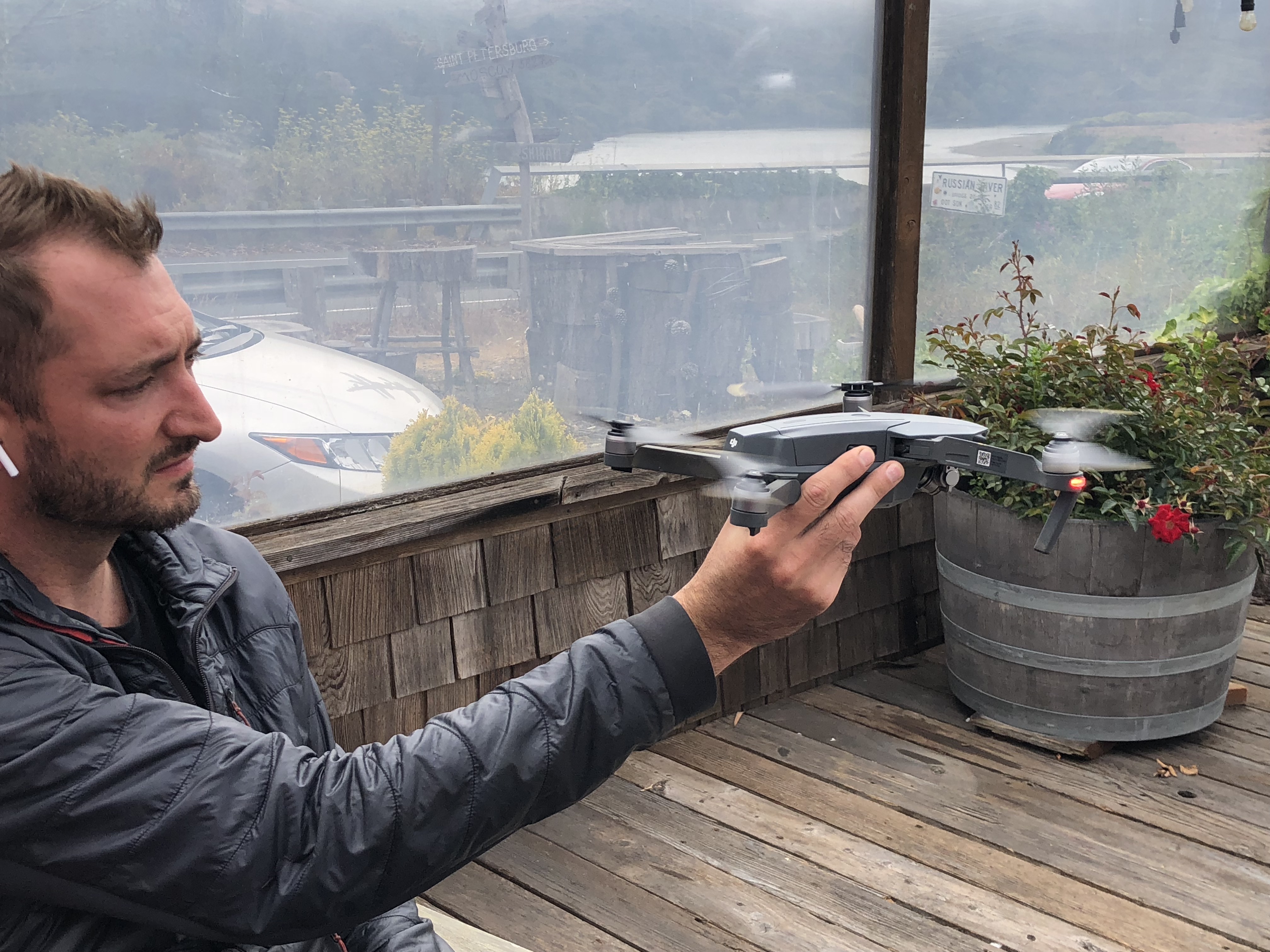 Paul told us modern fairy tales, where we would already lived in the virtual world, the windows of our restaurant would became projectors, actively responding to touches outside and inside and allowing people to learn any information about us and about them. In this tale, all of our space has become littered with video cameras transmitting information to all Internet channels, and allowing us to recoup our costs with the generous support of patrons from Patrion and other conscious Internet audiences. Unfortunately, this fairy tale is still a fairy tale, but for some time drones flew around the restaurant.

Our poster on SAND conference was illuminated by a super projector, and that made it possible to turn a dead image of a torus into a living, emerging universe. We also got a freeze dryer that allows us to dry borsch. Paul gave his super-video cameras to some guests of us and inspired their hope to shortly become a celebrities in virtual networks. In addition, Paul also washed the dishes. Participated in breathing seminars. Solved some puzzles and was struggling with the riddle about the trains. That one is still remains unsolved… as well as many other projects that we started with him 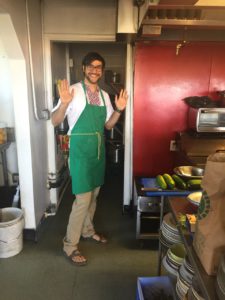 We spent a very soul-warming Sunday together with the company of guys who made us a real celebration of Russian-Ukrainian-American food!
Volodya is originally from Ukraine, his wife Kristen is from Louisiana, Alexander and his wife Mett spent Sunday with us cooking amazing okroshka, quiche, and blueberry pie. 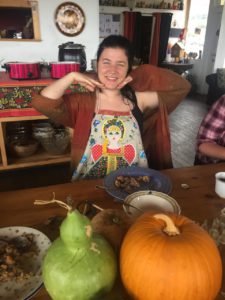 Traveler musicians Rachel, Reed and Holi spent a whole week with us, taking care of the restaurant on the days when we having a breathwork retreat.
Holi was a Michelin-based chef from Chicago. She taught us to cook delicious dishes from mussels and algae, which we collected in the ocean. 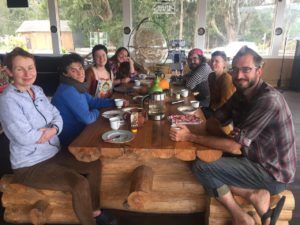 Energetic guys Al, Camilla and Valentina, who came to us from couchsurfing, helped us a lot during the weekend: they cheerfully and fervently cooked and cleaned.
And after their departure they sent us a luxurious blender, that we now use to make smoothies and sauces. 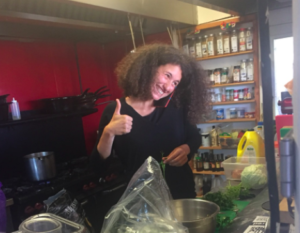 Charming, dancing and extraloving French girl Zelda, cooked excellent vegetarian food. Especially we remember her rice with beets.
You know, we, Russians, eat a lot of beets, but rice with beets I tried it for the first time, excellent! 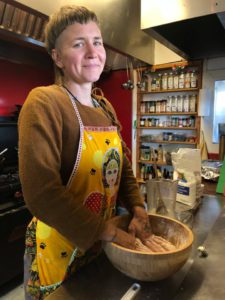 Suddenly appeared out of nowhere Mary turned out to be a baker. Her mother baked bread herself because of poverty in the family, and now Mary can bake almost anything. Mary stayed with us for two days and taught us how to bake rye bread, buns of garlic and cheese, and to cover muffins with melting in a mouth lemon icing.

Peter, made his real man’s contribution to our restaurant, repairing, dragging, patching holes, completing what was necessar

Arthur, the long term member of a communal movement, bonsai trees master, author of books and a man of different talents, had helped us tremendously with rebuilding our wooden patio and inspired us to form a non-profit. 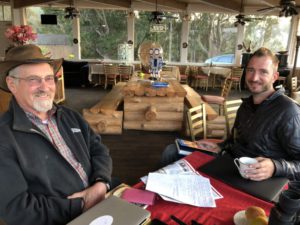 David, Kattie, Edith, Nancy, Nicolas, Giovanni, Sasha – our dear old friends! You are always coming to save us during the busiest times and contribute here all your best!

Great Thanks to all the Volunteers for their well-coordinated work and contribution to the successful development of our project! 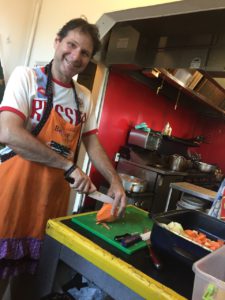