Report on Sanday club with Paul Rest, February 12, 2017
How Aikido can help change yourself and the world around you 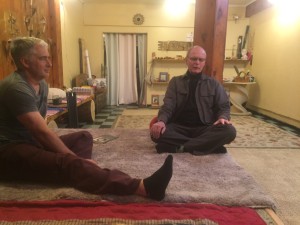 On February 12, an intellectual club took place with Paul Rest – an Aikido black belt holder and the author of the book “Aikido: An Everyday Approach To The Martial Art That Can Transform Your Life & The World” as a guest.

Paul holds a black belt in Aikido, gives master classes and teaches people how to use Aikido energy for internal spiritual changes.

I have been doing Aikido since recently, and it was Paul who had directed me to my first training to Richard. At that time I understood that I wanted to discover the world of Aikido.
I got involved at once after the first training but I decided to go ahead only in a month, after having read Paul’s book. Until then Aikido seemed to me too difficult to do at my physical development level but Paul’s book convinced me that I was wrong – you can start at any level; what matters is to feel the essence.
And masters are good at explaining the essence.
I have been doing Aikido for a month, that is why I have been looking forward to this Sunday intellectual club with Paul, so that he can help me become closer to the understanding of Aikido principles and the way I can use it for self-development. 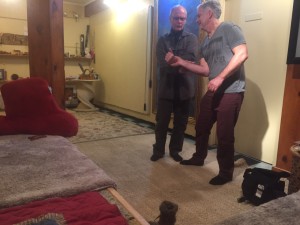 Paul started with telling us about Aikido founder – Morihei Ueshiba (O-Sensei).
While Paul was speaking, I was thinking of Morihei Ueshiba as of a great enlightened master and an extraordinary person who changed the whole world (that is whom I dream to become).
In the middle of war, he was the first to speak about peace and harmony. Not only did he speak but also created a martial art that was crucial for those purposes.
Paul described Aikido as a specific perception of the world that turns aggression into harmony. And it sounded very inspiring especially from Paul who had been doing this wonderful art for his whole life.

Paul showed us a few techniques, which gave me a vivid sense that my perception is wider than the physical body,
I can see what is behind me, I can feel another person’s intention with my eyes closed – I can feel whether he will attack me with aggression or do something good.
Another person seemed to be a flow of energy that could be felt and followed, directed and united with. This feeling provides me with an amazing power that I am lacking so much in my everyday life.
The power coming from inside, the power of centre and concentration.

Such a rich experience.

When the practical part was over, I had some questions to ask:
Can Aikido be a full-value spiritual path leading to enlightenment?
Should I do more Aikido and abandon everything else?

Having listened to Paul’s stories, I found the answers. Aikido really is a unique practice that helps people learn to control their body and energy, to manage their fears. However, many of those who dedicated 30-50 years to training and acquired perfect technique – never received enlightenment. So, Aikido is a good tool but there is something else that leads people beyond.

I realized that for me personally Aikido may become an important step on the way to integration. It can help me understand myself and control my energy. However, I also need something else to make a breakthrough (I believe in this way of changing who I am) and I keep looking for it.

As a result, I feel gratitude to Paul for what he did for me during the meeting. He explained to me the essence of Aikido, made this martial art closer to me and shared his own experiences. Now I really want to master this art as an important tool on my way to myself, and I will continue training.