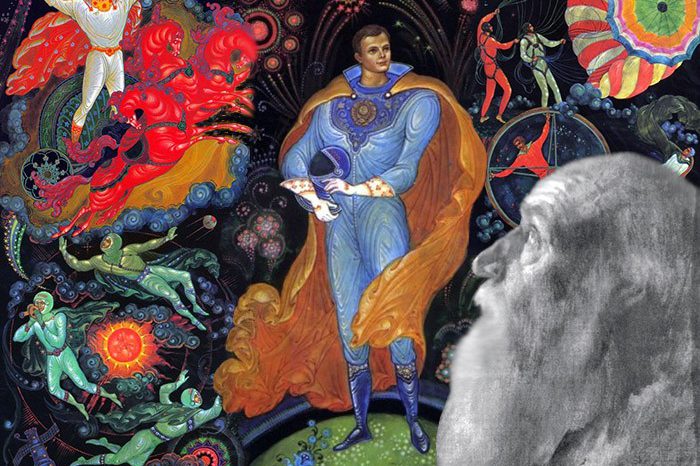 The religious and philosophical movement “Russian cosmism” was formed in the late 19th – early 20th century in Russia.

This movement was largely a forerunner of “holism,” the ideology of “integrity” and many others ideas like that … It originated from the depths of Russian culture.

One of this ideas identify Human as s Citizen of the world. And the world is Wholesome.

Space is a single system. Human beings are intended to populate the whole cosmos. The Earth is only their cradle.

Now the world is attacked by Western, mostly American – values.

The first of them is consumption. Pragmatism with its created and protected borders (such us mine-yours, family-work, etc.) is also dominating now.

And people, who are tired of the dominance of these values, look at the East ern countries: India, Tibet, where you don’t need to keep a certain appearance and to adhere to some societal behavior and not be in a hurry when you touch the Eternity, mixed with the overwhelming poverty around it.

And gradually, the Western people, even if they’re advanced, identify just two variants: formal relations or some infinite abstract values, such as nirvana…

We are creating the third variant, integrating these two approaches and, simultaneously, going beyond them.

In our opinion, a lot of new things have been created in Russia, but they are not known in the West yet because of the cultural detachment of Russia from the rest of the worldf. These are, for example, the meanings of the Russian fairy tales:

The naive hero of Russian fairy tales Ivan the Fool, who, as a rule, lies on the stove, does nothing and goes on the road only when he has no other choice… The flower of the fern… The hut on chicken legs… BabaYaga… These are just hints of what we hope to open with you at our week of the Cosmism.

And deep inside of our culture we still preserve the value of close relations, friendship, community, magic … of the really important things…

Throughout the weeks of Russian Cosmism we’d like to share with you these values, the wealth of Russian philosophy (Berdyaev, Vernadsky), and the magic of Russian fairy tales.

Russian mystics have preserved many practices that allow the characters of Russian fairy tales to revive and enrich the lives of people who have learned these practices.
During the whole week we’ll learn magic and live in a fairy tale.

Patreon of our Master