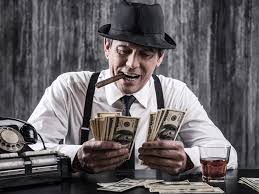 Millions of people play the intellectual game Mafia all around the world.

Let’s play this fascinating game too!

Mafia is a group game that enables personal growth, and it creates a great environment for interacting with other people. Most people see the game as a  team-building and psychological training. 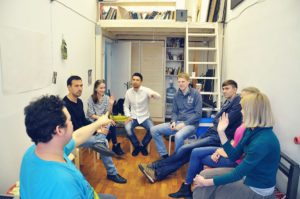 Mafia’s predecessors are The Werewolves of Millers Hollow and Cluedo – games that have been famous in Europe since the 1950s. The modern, team-based reincarnation of the game was thought up in 1986 by psychology student Dmitry Davydov. Mafia first became popular in universities in the Soviet Union; foreign students later took it with them back to their home countries, and the game found fame all over the world. Since its invention, many variations of the original game have appeared.

The most popular version of Mafia is as follows: The leader of the game deals out the cards to the 8-16 other players. Two or three of them are given the role of mafia members, one is told to be a policeman, and the rest are civilians. The leader announces that night has fallen and the city is falling asleep. The mafia wake up, they make each other’s acquaintance and then “murder” one of the civilians. At night, the policeman and the leader decide which player is in with the mafia. “Morning” comes, the players wake up and discuss who could be the murderer, and, after a vote, the player with the most unconvincing story is put in jail. Days and nights continue until the mafia members are in the majority, or, until all the bad guys are in jail.